I’ve been subscribing to the Citrus Twist Kit Club for over a year now and have really enjoyed all the things that come in the kits.  I only get the Main scrapbook kit and find that each kit contains enough supplies to make at least 4 layouts with minimal stash additions.  Trina Craig, the owner of CTK, posts a sketch challenge every Sunday.  The winner of the challenge receives a $5 gift card to their store.  I’ve been trying to use my monthly kits to make layouts specifically for these challenges.  Click here for this week’s sketch.

This will be the second layout using my December CTK Main kit.  The first layout I made can be found in the CTK gallery here.  The original sketch has a sunburst design behind the photos, but I wasn’t really feeling sunburst-y at the moment so I went with a couple of paper layers instead. 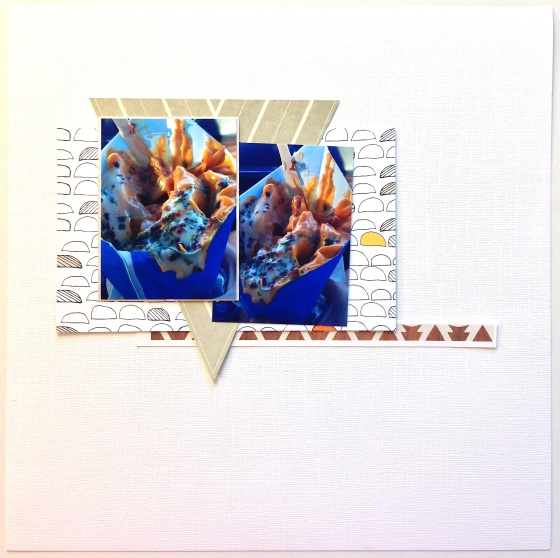 When I was satisfied with the placement of the papers and photos, I took them off the page and stapled them together so I won’t have to fuss with them again later.

Notice I stapled the patterned papers and the photo together.  I knew I was going to layer the second photo over this one so it wouldn’t show in the end anyways.  Two staples was all it took to keep everything together  🙂  Next, I worked on the background with some mists and stamping.  I was inspired by one of Anna-Maria Wolniak’s layouts where she repeatedly stamped a small image in different ink colors.  I chose three star-shaped clear stamps that came in previous CTK kits to do something similar but only using a couple of ink colors. 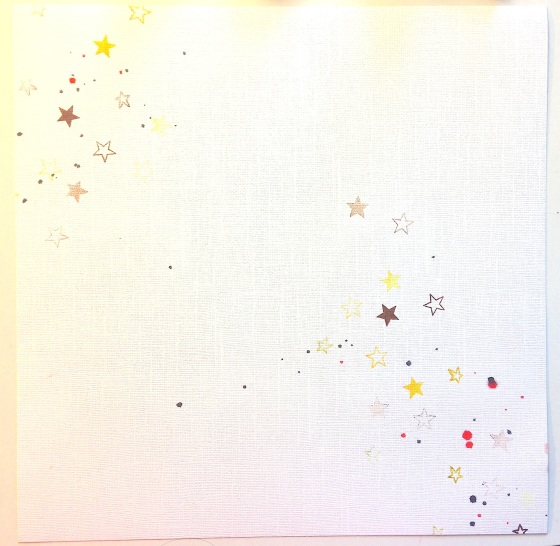 To finish the layout, I glued the layers onto the background paper and added embellishments from the kit.  Here’s the final result: 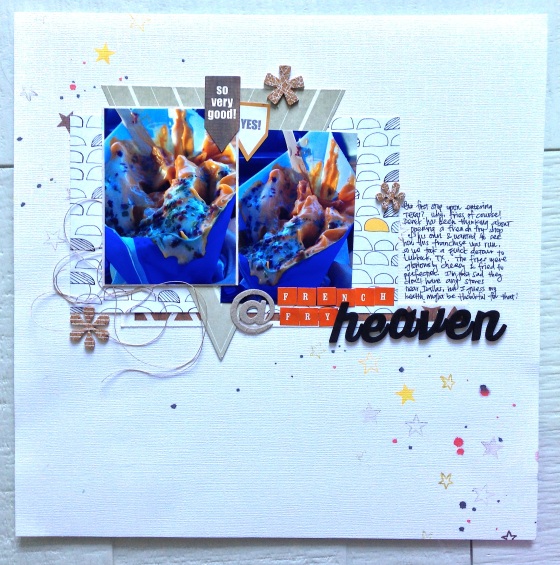 I actually made two mistakes during the layout process.  The first mistake was accidentally getting some roller adhesive on the right-hand side photo where the “YES!” die cut is.  I purposely put that die cut there to hide the mistake and created a tiny cluster around that area so it doesn’t look out of place.  The other mistake happened when I was trying to take off the “@” sticker next to the title.  The cork and underlying cardboard split as I was trying to remove it leaving only the cardboard backing.  I actually like the look of the plain cardboard so I left the “@” where it was without the cork veneer.  Just thought I’d share my clumsiness with the world and show that some accidents can be happy mistakes  🙂

All the supplies used on this layout was from the CTK December Main Kit or previous kits except the Bazzill white cardstock background, letter stickers, and Warm Calico Mister Huey’s.  Thanks for looking!

It’s officially 2014!  Can you believe it?  When I reflect back on all that’s happened in the past year, it seems a little surreal.  For me, 2013 started calm with a steady work schedule and a beautiful wintery weekend trip to Yosemite National Park.  Then it got a bit crazy in February when I started working like crazy…but I made sure to reward myself with two week-long vacations  🙂  Roll forward a few months….now here I am having moved across several states, traveled 3 countries, and am taking a break from work.  Whew!  It sounds like a lot, but I actually had a wonderful year that was filled with lots of love, laughs, and learning.  2014 will certainly be drastically different than 2013 in many ways, but I know the three “L’s” will be here to keep me company  🙂 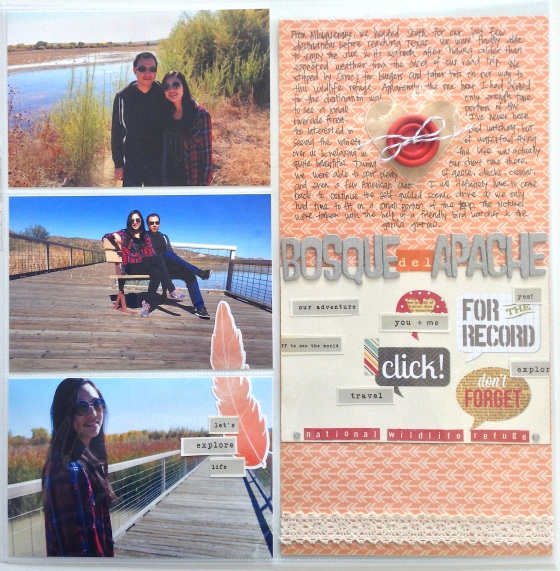 I was able to highlight the photos and also had plenty of space for journaling, the title, and embellishments.  But when it came time to make the layout for the back of this page, I stumbled upon a problem.  The photos I wanted to include from the event were portrait in orientation and will not fit “as is” into the photo slots.  Instead of choosing different photos, I decided to adapt my photos to this page protector.  Here’s what I did:

I printed three 4×6 photos from my home printer and arranged/glued them on a 6×12 piece of patterned pattern.

I then cut the 6×12 piece down into three 4×6 cards so they will fit into the page protector. 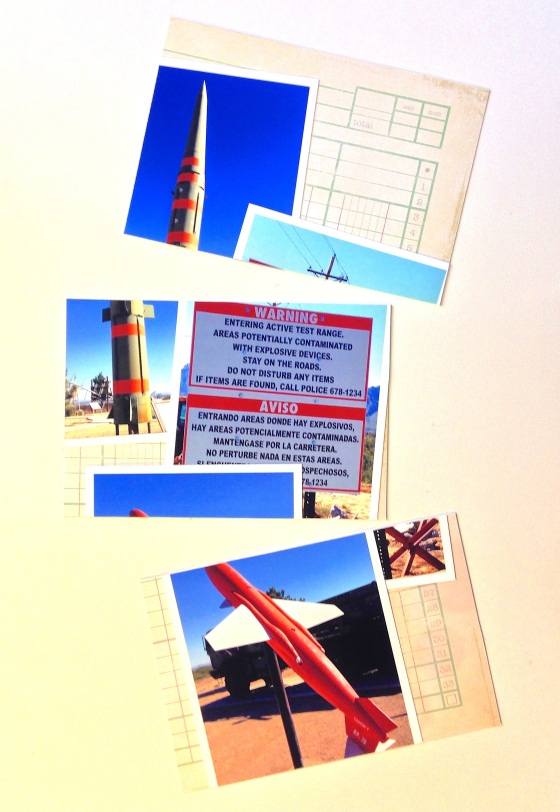 I added some embellishments and worked on the left side of the page for the final result:

I wanted to keep the left side relatively simple so it won’t detract from the photos on the right side.  I hope this post helps you feel less confined to photo orientations when you’re using pocketed page protectors!  Have a spectacular New Year everyone!

I got a fantastic box of goodies yesterday through the Two Peas in a Bucket “Wish List” forum.  The box included a couple of acrylic paints.  These are the first acrylics in my stash.  Yay!  The colors are “Petal Pink” and “Indian Turquoise” both of which I love.  I used a small dash of each of these paints on this layout.  I found out a little goes a very long way with acrylic paints, so I know these bottles will last me a while 🙂

I got inspiration from a layout by Ashli Oliver where she used washi tape in a grid pattern.  You can find her layout here.  Instead of washi tape, I used scraps of paper I had leftover from other projects.  I cut the scraps into strips and then applied them to the background paper using matte Mod Podge. 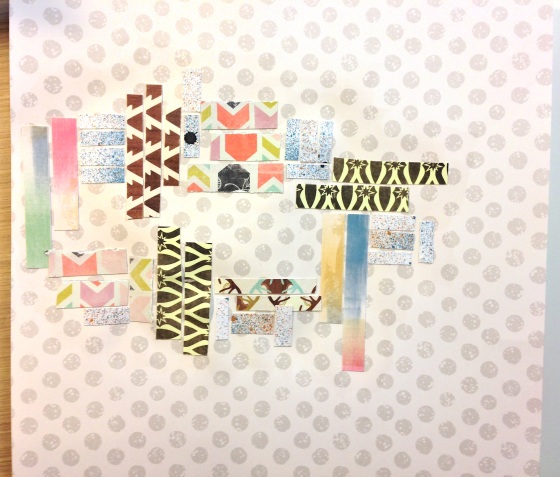 I wanted to tone down the colors of the paper strips a bit, so I added a layer of gesso wash (2 parts gesso to 1 part water) over the paper.  I then added the acrylic paints for some fun.

To finish the layout, I added ink splatters in Warm Calico and Opaque White (Mister Huey’s), the title, journaling, and a little bit of doodling.  The final step was matting the entire page on another patterned paper to add stability and minimize warping of the paper from all the wet media I used.  Here’s the final result:

For my first post on this blog I’m going to share my process for creating a 12×12 layout that will be part of my road trip travel album.

This layout is from a self-guided “Breaking Bad” TV show tour I did with my fiancee a few months ago when we passed through New Mexico for our road trip to Texas.  For those who aren’t familiar with the show, the series ended earlier this year and had somewhat of a cult following.  I only watched a few episodes, but my fiancee followed the series ever since the beginning.  His only request for our entire trip was this little tour!  From the small doses I’ve seen, it’s evident the show is definitely not for the faint of heart….a lot of violence, drugs, etc.  To capture the personality of the show, all the layouts I made for these events have a grungier feel than my normal style. 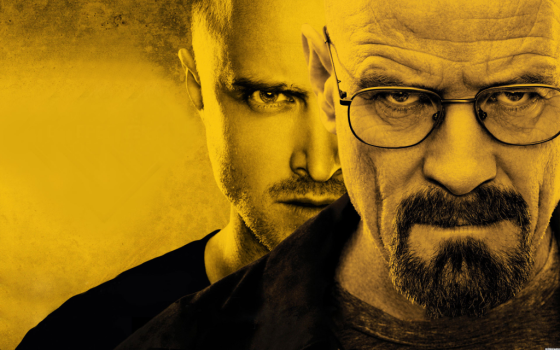 The photo I’m using isn’t the best quality since the lighting was off and I used my phone.  It’s the only photo I have at this particular location, though, so I’m just going to use it anyways.  I used one of the built-in filters on the iPhone 5 when taking this photo.  I believe it was the “Transfer” filter.

I chose the “Collectible” patterned paper from Maggie Holmes for Crate Paper “Flea Market” line because I liked how the bold yellow diagonal stripes complemented the yellow in the photo.  I used white gesso over a polka dot Crafter’s Studio stencil.  The stencil is only about 6×6 in dimension, so I had to stencil three separate times to adequately cover the page.  I heat dried and cleaned the stencil between each new application of gesso.  I then splattered three colors of mists mostly diagonally across the page (Studio Calico “Warm Calico”, Studio Calico “Leaf Green”, October Afternoon “Rotary Phone”). 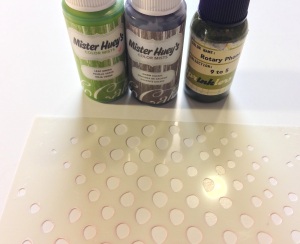 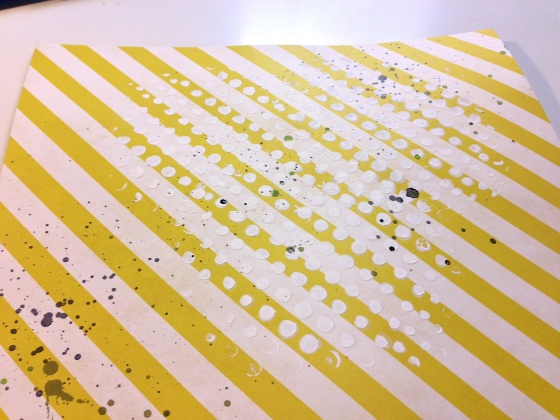 To add depth to the photo, I used two 4×6 cut apart cards from Simple Stories’ “24/7” line.  I had already used another element from that paper, so it was technically a scrap I had lying around.  For embellishment, I chose several die cuts from the Ephemera Pack of the same Maggie Holmes collection and layered them down a line behind the photo.  I inked the edges with Hero Arts’ “Charcoal” mid -tone chalk ink on all the papers and embellishments before adhering them to enhance the grungy look.

I added the the letter stickers and journaling next.  I added grayish black coloring to the white Thickers using the same Charcoal ink and a wet paintbrush.  The letters used are American Crafts “Roster” DIY Thickers and Jenni Bowlin Studio’s “Grey Skinny Alpha”.  I finished the page off with a few strips of a grey chevron washi tape, a bit more misting at the bottom of the embellishment cluster, and three small triangle stickers from Carta Bella’s “Wild & Free” collection and called it done! 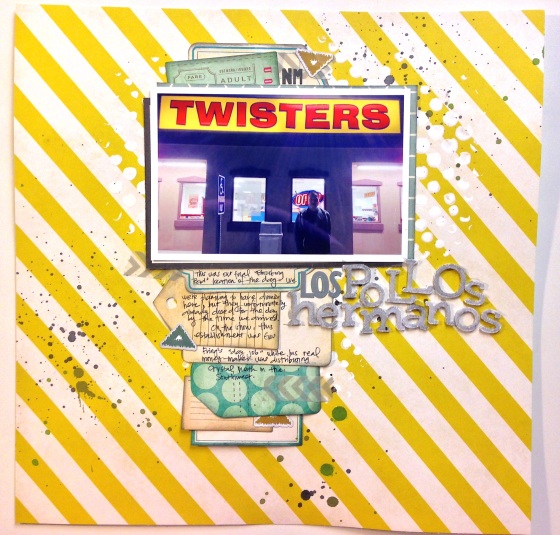